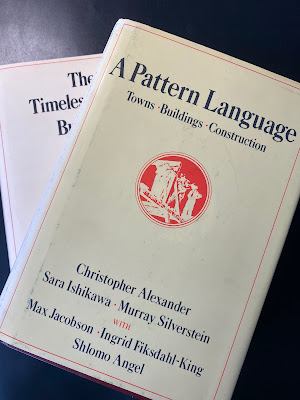 It was 2011. I had never heard of him, but when I heard someone I respected say "I read anything Christopher Alexander writes," I was curious. When I got back to Melbourne (the comment was made in a little town in Wales) I scoured and searched and eventually located a hard cover copy of the 1100 page 1977 classic A Pattern Language in some obscure bookshop. I still remember paying an extraordinary amount of money for it ($174 if I recall correctly). Maybe a bit reckless, especially given I hadn't even read a review; I wasn't even sure what it was going to be about, but sometimes I have these intuitions ... and for reasons I can't properly explain, they are very rarely wrong.

My bookshelf if full of books that have nudged my thinking, authors who have given voice to ideas, concepts, frameworks or arguments that have shaped my own view of the world. But I don't think a single text has had as profound an impact as A Pattern Language on, not so much 'what I think', but 'how I think'. It wasn't just the genius of the content, it was the very idea that such a thing as a universal language of architectural design was even possible. For me it was a conversion moment, I moment like for Neo in the original Matrix movie, when we saw past the representation of the Matrix and saw the code.

Alexander and his co-authors answer all these question and so many more by seeing past the particular design challenges, articulating a number of patterns (253 to be precise), each with a name (eg. street window), a language, that can be 'spoken' in any built environment situation.

This was it. A holy grail. A way of seeing beyond the 'thing' and discerning the patterns that make them work (or not). I have not memorised every pattern, but there are many that have stuck in my mind, perhaps because of how often I see environments where the pattern has not been applied.

1. Courtyards. Courtyards, or small outdoor enclosed spaces must have 2 entrances / exits. With only one there is no flow and they become dead ends, dead being the operative word. How many times have you seen little alcoves in inner city houses that are dark and useless? I haven't thought about it much, but apart from wind and sun, it's also one of the reasons roof top areas on domestic homes rarely work.

2. Human beings are drawn to natural light. A well designed indoor space will provide a comfortable place for people to be when drawn to the light. It's why, for example, bay windows with comfortable cushions are sooo good. So if there is natural light, make sure the place people are drawn to has seats or places for them to be comfortable.

3. Pathways to front doors feel better when there are bent. It is part of the psychological transition we are invited to make from being in the street to being indoors. It is why the classic path from the picket fence to the porch curves, and similarly why many front doors are perpendicular to the direction of the path.

Pattern wisdom in this case is the nous to apply these patterns, to 'speak this design language' in different contexts. It is not about a set of rules that must be followed, it is a recognition of patterns that are both functional and beautiful, and ensuring the pattern is followed.

It wasn't until years later that I discovered Alexander had written a prequel to A Pattern Language (1979), a philosophical foundation for the patterns called A Timeless Way of Building. Simple brilliance. This is wisdom, recognising that patterns do not sit in a vacuum. Their relative beauty comes from a particular perspective. Acknowledging and being able to articulate that perspective and its origins is wise.