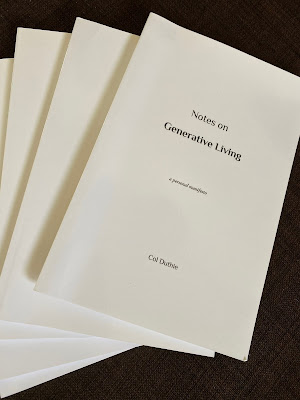 I didn't really like English studies at school, but I loved the year 11 unit called "transformational grammar", in which we learned to use an almost mathematical perspective to break down the structure of sentences into their component part. The idea, developed by Noam Chomsky and other earlier linguists,  was that once the structure of grammatical sentences was understood, you could then be infinitely creative while maintaining a 'sensible' sentence. Language patterns. It wasn't until decades latter that I would learn the word that was originally attached to this field of study: "generative grammar".

I had first heard the word in an entirely different context, in an international forum promoting genuine dialogue among people with different perspectives. Peter Senge called it "generative dialogue". I was intuitively drawn to the idea of generative dialogue even though I understood very little about it. As I dug deeper and tried to understand what Senge had meant, I started to recognise a pattern; by understanding the design elements of authentic dialogue (rather than consultation, debate, discussion, advocacy or other practices that sometimes masquerade as dialogue), it would be possible to generative momentum toward positive social change.

I discovered that the term 'generative' was coined by psychologist Erik Erikson as part of his influential model of human development. His 7th stage "generativity vs stagnation" dealt with the middle stages of adulthood when the opportunity to orient toward the next generation presents itself. Whatever other meanings generativity has taken on since then, it always retains this idea of reproduction, the notion of passing the baton, merging what is into what comes next.

I subsequently learned of the use of generativity in other domains. Brian Eno worked on generative music; using electronics and computer algorithms that facilitated self-generating music. The ubiquitous computer screen savers from not that long ago could be thought of as examples of 'generative art'; patterns that self generate ad infinitum. In all these cases, the elements of generativity are hard wired patterns that have the capacity to be repetitively self-creative.

While I was fascinated by all this, I was deeply interested in a higher order question: what was generative living? There were subsets of this; generative relationships, generative workplaces etc. While I was curious about a general (population wide) answer to the question, I knew the first step was much closer to home. What did it mean for me to live generatively? I set out on a quest, which was mainly about observing patterns, to understand my own living; what were the patterns that, if understood and 'installed' would offer me the design foundation from which to be infinitely creative while ensuring my living was paying it forward for the next generation.

My observations got distilled into what I called drivers, foundations and disciplines. The result was a little book manifesto written back in 2016 called Notes on Generative Living. In it I outline the 3 drivers (pleasure, betterness and meaning), the 2 foundations (community and home) and the 4 disciplines (unstuck, uncluttered, modal living and contentment) that for me are the design elements of a generative life.

Understanding the nature of generativity helped me understand much more than its application. It was the idea that if we master a domain of knowledge to the point we can understand the underlying patterns, we are then free to be as creative and diverse with those fundamental design principles as we choose to be. This was not about determining a set of rules, a dogma or ideology to follow, it was about developing a theory of 'essence' that facilitated freedom.

We don't need to recognise a pattern in order to benefit from it, in fact self-reflective people figure a lot of this stuff out intuitively. But for me, having put in the effort to understand the patterns of my life over a long period of time, and making the effort to articulate them clearly,  has offered me a lens with which to understand what's going on for me (a diagnostic), as well as being a frame within which to make decisions about how to live well.

[As an aside: I have not pursued this exploration beyond what I have found to be true for me. I shrink from the presumption that what is true for me is true for anyone else, let alone everyone else. But I also have a suspicion that a generalised theory is there to be explored; in fact my view is that so much of the so-called self help literature is someone's attempt to develop such a theory. The problem I have with it all is the massive leap people take from knowing something being helpful for a particular set of people in a particular context, and then making generalised presumptions about all humans without any broad based research to back it up. This is the folly of so-called thought-leadership that doesn't operate in a context of peer or public scrutiny, but within the protection of homogeneous tribal tents.]