My first encounter with personality-typing was not a good one. At university I came across a basic framework based on four temperaments: Sanguine, Choleric, Phlegmatic and Melancholy. By answering a series of self assessment questions, respondents were assigned a dominant and secondary temperament. It came at a time when I had some friends who I admired. I was drawn to them, not only as mates, but as people who aspired to be like. We, and a whole bunch of other people we knew completed the assessment survey.

My two mates both had Sanguine Phlegmatic profiles. They were outgoing, likeable Aussie blokes who had a certain nonchalance about authority. Me on the other hand, I was Phlegmatic Melancholy. I didn't like the stereotypical description of my type, which would have been OK if, on discovery of my typing, my mates exclaimed, 'Yep, that is so you!'.

It would be much later that I came across a quote attributed to American actress Pearl Bailey, "There's a period of life when we swallow a knowledge of ourselves and it becomes either good or sour inside." At the time I didn't have the emotional maturity to embrace who I was, rather than who I wanted to be.

Since that first encounter, I have become familiar with a number of personality profiling tools including DISC, TMS, Herman Brain Dominance and Enneagram, but the one that I have found most useful has been the Myer Briggs Type Indicator. (I'm not suggesting it is the best, simply that I am most familiar with it, having become accredited as an administrator of the tool at an advanced level.)

The development of the different types within the MBTI framework happened over a very long period of time, leaning on the work of formative psychologist Carl Jung. Essentially, it was patterns of behaviour that were synthesised and grouped which led to the 16 basic personality types within the MBTI framework. It was recognised that people tended to live out a preference on 4 binary scales, in ways similar to how we have preferences for right or left handedness. The combinations of these preferences fitted with beautiful symmetry onto a 4 x 4 matrix. 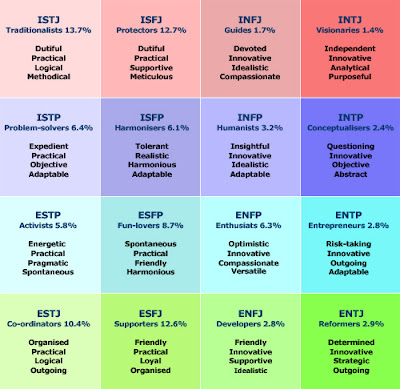 What captivated me about the MBTI types was how accurately they described the real people I knew and how helpful the framework was for helping people understand themselves, how they were the same and different in important contexts like at home and at work, and most significantly the pathways that emerged for healthy personal and professional development.
But I developed a love/hate relationships with the tool. I grieved at how I saw the tool used to constrain people rather than liberate them. The four letter types were often used as labels ('What would you expect, she's an ISTP!') or worse still, for people to put themselves in boxes as an excuse for poor behaviour ('get over it, I'm an ENTP.')
Let's map personality and behaviour patterns onto the Data, Information, Knowledge, Intelligence) Wisdom model. The data is the pattern of my behaviours. MBTI theory says that I will typically behave in (predictable) ways consistent with my psychological preference. (In the same way that if I am left footed, I will typically kick a ball with my left foot.)
The information is then the mapping of this data onto a framework that helps me understand how I am the same and different to other people in some significant ways.
I am able to develop knowledge is this as I am exposed to information about the tool and my own MBTI preferences.
This knowledge can evolve into intelligence as I appreciate the influences on my behaviour, how I act out of preference on occasion and the impact of my personality preferences on other people.
Wisdom is the application of that intelligence to decision making in my life, including knowing when the MBTI is the wrong 'language' to use in responding to a situation.
I recognise now that my frustration with the way I saw people using the MBTI were examples of pattern knowledge without intelligence or wisdom. Immature application of the MBTI essentially amounted to an inability to appreciate the limitations of it as a language and the inability to recognise it as a set of information, not the complete or absolute truth about someone.
Personality patterns are a really important example of how pattern wisdom can make a difference. One of the ways recognising behaviour patterns is helpful is in relation to consistency. Many decades ago I had a mechanic to whom I was loyal, following him to different suburbs when he upgraded his workshops. In a conversation with him one day, I made the comment that I chose to use him the first time because I saw how meticulously he kept his workshop. The consistency principle I applied was that if he took that much care with his workshop, he would likely take the same care with my car. That proved to be true.
But pattern wisdom recognises that that validated observation doesn't tell me everything I needed to know. Just because he was tidy and careful, didn't mean he would necessarily be a good mechanic. I reasoned that he would probably be really good at standard servicing and predictable problems, but maybe not so much with tricky issues that may require creativity and experimentation. These problem solving personality traits are more likely to express themselves in chaotic or messy workshop ...
But these are hypotheses. They are not truths. Pattern wisdom recognises a pattern as a pattern, not as a failsafe predictor. However, it also appreciates that more often than not, patterns repeat.
My 'fluency' in the language of MBTI as a way to understand people, means that without thinking about it, I see people's actions and reactions through the lens of the 4 binary preferences of MBTI. I intuitively extrapolate from a few simple observations to be able to understand a lot about people's living and work-styles.
But knowledge is not enough. It must be understood in a broader complex and often hidden context. This understanding facilitates intelligence and ultimately wisdom, which should lead to decisions that help us and those around us live better. This happens not by putting them in personality boxes from which they never escape, but by appreciating the nature of consistency and psychological preferences - behaviour pattern wisdom.