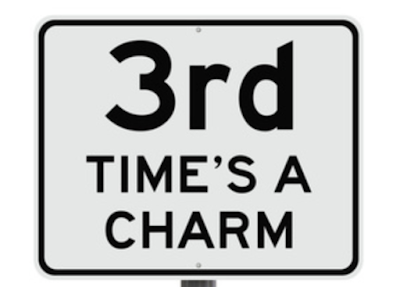 The first time I made paella, it wasn't a disaster, but it felt like I was simply hoping for a good outcome rather than creating one. The second time was better, but I struggled to get the volume of stock and the intensity of the heat right. By the third time I understood the variables so much better, and managed to get a socarrat that I was proud of.

We have been lucky enough to have spent winter weeks in northern NSW over many years with a big bunch of friends, doing not much apart from drinking cups of tea, surfing and sitting around nattering, alongside keeping the work fires burning. Integrating work and recreation is always tricky, especially because these days the mobile device ensures work conversations and issues are always in your pocket. The first week I typically find myself checking emails and messages throughout the day. By the second week, I find I can segregate more easily, so I am less distracted by work when I'm doing more social things. By the third week I tend not to care if I don't check my phone for hours on end.

When on holidays in a new foreign city, the first day it typically spent doing the 'must see' touristy sights. The second day, at least for Maria and I we start to make some choices and the transport options begin to show themselves, but it's not until the third day that we find ourselves sitting in a cafe with the time just to take in the environment without thinking about the clock. This observation of how we engaged led us to a principle of travel we have applied many times over: (when travelling for recreation) no less than 3 days in a new city, no less than 3 weeks in a new country. [even if that severely limits the breadth of experience]

There is something about engaging something for the third time. You can't skip one and two, you have to go through them to get to three and beyond. Once you recognise this pattern, you see it everywhere. It always takes the until the third episode in a TV series for the major plot items to show themselves. The third series in a car model is always the one to buy. The third decade of work is when one typically is at the peak of one's powers. It's like Chicken Man ... it's everywhere, its everywhere.

So in the DIKW pyramid, we're at knowledge. What would pattern wisdom look like?

Maria and my travel principle is perhaps an example. Taking a basketball shot could be another: first shot, miss to the right. second shot, over correct to the left, or not enough correction. Third shot, swoosh.

More recently, when in a different state for an extended period there were a few people, who we knew bit not super well, we wanted to catchup with. I applied the 3-pattern in each case, which simply meant I committed to meeting with them (at least) three times. The first time you exchange pleasantries and talk about predictable things. The second time allows the conversation to develop, but it's usually not until the third engagement that you start to relax properly with each other and feel like the relationship begins to get below the surface.