- October 14, 2020
I have taught myself to cook by recognising patterns rather than following recipes.
I stumbled on The Saucy Spice Co. when away in our van many years ago. I loved the product and when we got home found a local stockist and started to use it regularly. The concept is simple, combine in a packet a particular collection of spices with a recipe. Typically, the things you need to add / buy included onion, stock and/or coconut milk along with meat and rice.
After I had been using it for a while it dawned on me: every recipe uses the same formula.
1. Sauté onion in oil.
2. Add the spices and heat for a minute or two until aromatic.
3. Add meat and brown.
4. Add liquid (maybe some tomatoes) and cook for an hour or two.
5. Add a few garnish-y, soft flavours and serve with rice or bread.
Ta da.
Now I appreciate that there are nuances, and trained chefs might be horrified, but I figured I now knew the basics of curry making.  I could now go the fridge and my spice drawer and make up recipes. I understood there were families of spices associated with different cuisines so could choose a set based on what I'd learned, pick a meat or vegetable mix, make choices about creaminess (coconut cream / milk), tomato-iness, base flavour (stock) and away I could go.
Maria and I went through a period where we watched a lot of foodie TV. (We had a Foxtel subscription at the time and our go-to channel was Food Safari). By watching and learning, we observed some of the cooking patterns that defined different styles of cooking. I found it extremely liberating and freeing. I reasoned that if I could grasp the pattern for a particular cuisine, I would not need a recipe, I could improvise within the pattern, while considering the kinds of produce sets for which the pattern was designed.
One evening we tuned into River Cottage (the original British show). Hugh arranged on his kitchen bench 9 cups: 3 had (different) fruits in them, 3 had various 'creamy' stuff (Yoghurt, whipped cream, mouse - for example) and the last 3 had variations of 'crunchy stuff: muesli, crumbled biscuit, honey comb - for example. He then proceeded to illustrate how he could create 27 different desserts by combining 1 fruit, 1 creamy thing and 1 crunchy thing. And each one of them looked good. He had explained the pattern behind the design of a good dessert.
Now, I can evaluate desserts on a menu or make my own by assessing the combinations of those three types of ingredient, which I have discovered, pretty much all good desserts have. It's why apply pie tastes so much better with icecream; it is why adding nuts to some puddings lifts them from good to great ... 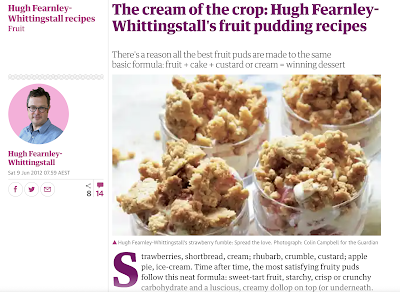 Now I look at food through a pattern lens. I find myself asking, what are the design principles behind this dish? What are the foundational ingredients that form the pattern?
When I set out to cook a new recipe, I am always looking for the pattern. I often need to try something 3 times (see the 3-pattern) before the pattern starts to reveal itself, but a pattern there will surely be! Everything is a variation within a pattern.
Does pattern intelligence and wisdom apply here?
Wisdom; maybe not. But I can see how appreciating the limits of patterns might allow creativity that breaks the rules, but maintains the quality of the dish. But more often than not, food pattern intelligence will be about creativity within the pattern, not outside it.
Tonight I'll be cooking risotto ... with ingredients we already have. But I know it will be good, because I know the pattern.